The Victorian government’s decision to enforce a snap lockdown has come at a devastating cost to many small businesses with the economic cost somewhere in the vicinity of $1 billion.

Bill Lang joined Matt Doran on Channel 7’s Sunrise program to provide an insight into the small business sector. To watch the video segment please choose from one of our following channels – YouTube, LinkedIn or Facebook. Or read highlights from our transcript below. 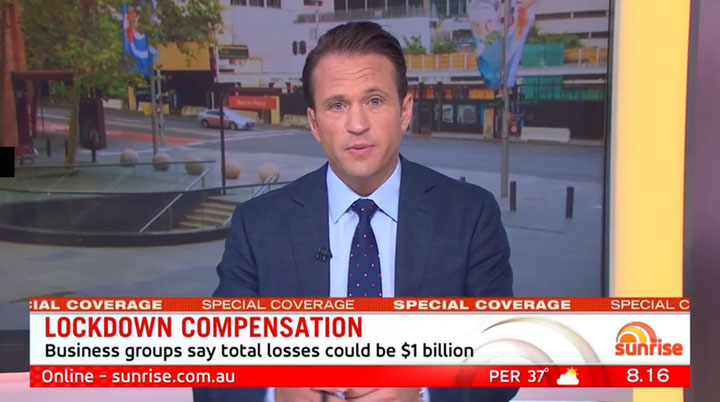 Matt Doran (Channel 7)
Well, business and industry groups this morning demanding compensation with pictures from Melbourne 6pm news last night showing the absolute heartbreak and devastation caused by the Victorian government’s snap lockdown. Today Valentine’s Day alone is estimated to cost restaurants $100 million in lost revenue and florists, $36 million. Over the five days retail trade is forecast to take a hit in the hundreds of millions of dollars the overall economic cost of Victoria, somewhere in the vicinity of $1 billion incredible numbers.

Bill Lang is the executive director for Small Business Australia joins me now from the Mornington Peninsula, Bill, a very good morning to you. Let’s talk these small businesses often they are family businesses, we know they are already doing it tough. This is yet another blow. What’s the feedback you’re getting on the ground there about just how devastating this five day lockdown will be?

Bill Lang (Small Business Australia)
That’s a very good point you make them Matt, in fact there’s 5 million Australians depend upon small businesses to earn their income. So in fact, every small business in the country is a family businesses one and a half million of them here in Victoria. Yeah, they employ about one and a half million people working those businesses in Victoria or own them. So the impact for them is absolutely devastating. So there’s those industries that you’ve identified directly, but many others have had to close down. And there’s now a great tidal wave of increased uncertainty around the competence and therefore the confidence that we can actually have that the government knows what they’re doing.

Matt Doran
Bill, the Andrews government, obviously arguing that we’re doing this snap hard lockdown to prevent further pain for businesses by having to look at potentially a third wave. What’s your view on that? And I guess, what is the answer here? Would the small businesses like interim compensation perhaps?

Bill Lang
I think last time around with the second wave that we were told that it was going to be two weeks, the Victorian businesses and the people of Victoria extended to be two weeks. Two turned into 12. This time around, we’ve been told it’s going to be five days, some people just so concerned will five end up being 50. And then we hear that, you know, the premier yesterday is making comments that they’re starting to think through what compensation might be available, we’re not at the start of this pandemic, Matt we are now almost 12 months into it. So if you’re going to come out and do things like snap lock downs at the same time simultaneously, that means you have to be able to sort of walk and chew gum, you announce what the compensation and financial supports going to be. And then you go about getting it into place and making it directly available. Now, last time around, there were very big numbers thrown around $100 million for sole traders and sole traders, are a legal structure, there’s about 300,000, sole traders in the state of Victoria, was only enough money put in that fund for about 33,000. And guess what, there’s less than 5,000 have actually been able to access it.

Matt Doran
Is that right?

Bill Lang
There’s major concerns around the competency. There’s a lack of credibility with respect to have they thought it through? Do they have the processes in place? The best predictor of future behaviour is past behaviour. And sadly down here in sick Victoria, we’re seeing that there are major sicknesses in the way we go about doing things in these areas, not just the fact that we might have today, up to 20 live cases, and 6 million people are being forced to stay at home.

Matt Doran
Bill, as the Executive Director for Small Business Australia, you have the year of all of these businesses that are teetering on the edge. Do you believe that this five day lockdown, you know, you look at it as just a five day chunk will be enough to push some of them over the edge? I mean, they’ve spent 1000s of dollars on food for Valentine’s Day, etc? Or will they survive this snap lockdown?

Bill Lang
Let’s put it put it this way, Matt, there’s a bit over 2 million small businesses in the country. We conducted a significant amount of research at the end of November last year. So before we had the small outbreaks in the northern shores, and Sydney, etc. But there were 20% that said at that point in time, if they weren’t going to get any more direct assistance to help them keep going from sort of March onwards, they would be closing their doors permanently. And that was before what happened in the Northern Beaches. And well before what’s actually happened here in Victoria. In these numbers, you guys are doing a great job at letting people know $1 billion is a lot of money. But for the small business owners, that’s more money coming out of their pocket. We’ve already had 100,000 have to sell their houses last year to be able to keep their businesses going. 500,000 have had to tap into their superannuation. This is costing small business people, small business families, real money, and they are not being directly supported enough by any government in the country.