As the cargo ship is successfully removed from the Suez Canal, more than 300 ships trying to get through to deliver their cargo.

The flow-on effect means there are major implications for businesses waiting for their stock to arrive and the shortage of shipping containers to send their stock. 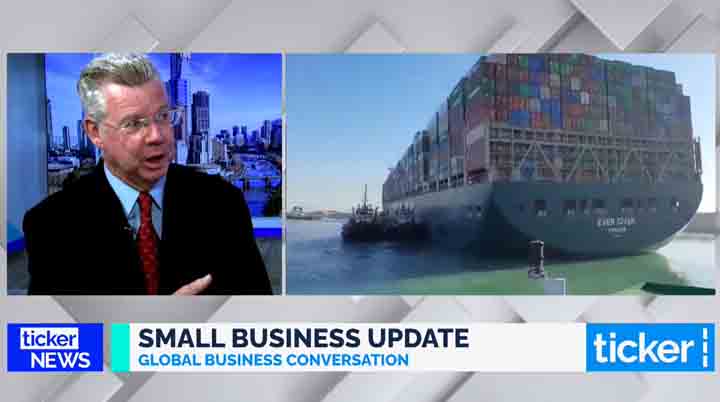 Now let’s start off tonight by talking about the cargo ship that’s been blocking the Suez Canal for the past week. I mean causing major implications for businesses right around the world, can you just elaborate a little bit for us what the implications actually were.

Yes, so it’s been six days so far they’ve started to get it moving but it has major implications in a few areas.

Now outside of the Suez Canal, there is more than 300 ships sitting there trying to get through and get started, everything around the world’s being impacted, everything’s being delayed and there’s about to be a major shortage in actual containers.
So even for people that export that we’re expecting empty containers to be offloaded on ships, now they’re going to have to wait, so there’s major implications across most industries right around the world.

Yeah, I mean it’s been a flow-on effect for many industries that when we know where the oil as well as being a massive hit to Australia especially. What is the solution here and how can we prevent these if this was to ever happen again in the future?

Well I think we have to assume these sorts of events will take place and whether it’s related to sort of you know extreme weather events, which was the case here, or other geopolitical issues there is two keywords for anyone in business.

So those that have already built up inventories in certain components or ingredients they’re in pretty good shape but if you were running low on those things you could be in a lot of trouble. So going forward-thinking about the buffer, the buffer of inventory and then diversification what are the alternatives you can source closer to home perhaps it isn’t relied upon a container ship going through the Suez Canal or the Panama Canal.

Absolutely I know many people have been joking about this ship getting stuck now but it’s actually not it’s a flow-on effect to millions of businesses right around the globe and so now it’s beginning to float again which we know is really good news.