Research shows that 2 in every 5 businesses need help with digital aspects of their business but don’t have the skills to implement or funds to hire an expert. The Digital Business Cadets program is a joint initiative with Small Business Australia and the Institute for Advanced Business Studies to skill young people in the world of business while providing practical help for small businesses with their digital needs. 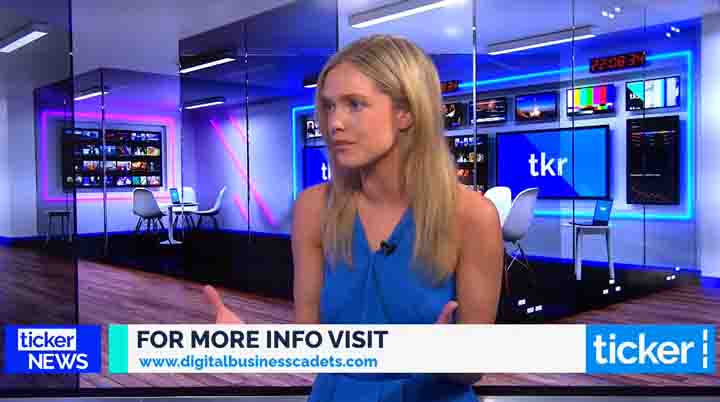 We know as well now that research actually shows that 2 in 5 businesses actually need more help moving into this digital realm that we’re all on. And we know now that most industries, if not all, have had to move into that digital realm. How can they get support about this?

Yeah, well, that’s an interesting one. So still, say in a country like Australia, half of the 2 million businesses don’t have a website.

Now, some of them had a Facebook page. But then we saw recently that Facebook can turn those things off whenever it wants to.

So increasingly, every business needs to have at least a basic website. So there’s at least a million of them that don’t.

Then there’s other things like just having a database or a list of people you can contact via SMS and via email, that if you know, something changes in your business, you can reach out to them and communicate directly with them. Now, a lot of small retailers and hospitality businesses, they didn’t have that in place. So this big gap that’s out there is something that needs to be filled.

We’re really excited at Small Business Australia because we’ve partnered up with the Institute of Advanced Business Studies, to create something called Digital Business Cadets. And the concept with a Digital Business Cadet is that you know, we have people at the institute that are learning these digital skills, and can come along and then do their projects as part of their training programme, working inside these small businesses.

And so for those small businesses that struggle to have enough budget to be able to hire experts and consultants are going to be able to get young candidates that can work on their particular business to help them get more digital.

Oh, definitely. I mean, I was only speaking to a man yesterday where he’s worked in his business since, you know, for 40 years or more. And he said, I’m just not, I’m not invested in that realm. I don’t know about it. I’m not motivated by the digital realm. I need help with it. So that sounds like a really great initiative. How do they actually go about I guess, becoming a Digital Cadet?

Yes. So there’s a website called www.digitalbusinesscadets.com. If you are an employer of a small business, and you would like to host a cadet, there’s some information there. And then you can complete a form and some more information will be sent to you. So it’s really straightforward.

Then there’s actually the cadets. There is a lot of young people and very sadly, this year in Australia, there’s not a lot of jobs around necessarily for young people. So they’re looking at what to study at uni or TAFE. But this is very practical. So they’re able to get involved in doing a Certificate in Business and learn how to use things from companies like Microsoft and Google and get some accreditation and some certificates from those companies.

And then do projects, real projects inside the small businesses. So if you’re a cadet, and you’re interested in business and digital business, go and check out www.digitalbusinesscadets.com and express your interest and you’ll get some more information.

The whole thing kicks off in the next few weeks. And there are already hundreds of businesses prepared to host cadets. And now we’re taking you know, enquiries from people that want to get involved in the cadetship program.

Absolutely. And when you think about the digital business tools, the sorts of companies that provide some of them the free tools, some of you pay a small amount of money for every month, but they’re people like Microsoft, like Google, like Facebook, like HubSpot.

These tools are used by businesses all around the world. And whether they speak English or whether it’s another language, they’re the tools that are used.

So there’s already some enquiries coming in from young people in other countries outside of Australia that want to be in digital business cadet, so certainly our plans are for that to be expanded and available globally, for any business that wants to cadet and anyone who wants to learn those skills.

Absolutely. I mean, it would even be good once the borders do reopen. And hopefully, that is soon but for international students coming in who want to learn the language a little bit better, and really build those skills and that kind of thing as well. It’d be a great incentive for them to maybe get involved in something like that as well.

Okay, absolutely. Particularly when some of them are, you know, they’ve been doing very helpful work and hospitality and those sorts of industries. But the future is digital. And the future is about business. And whether it’s working in a business, providing services to a business or getting your own business going, learning about business and the digital business tools and how to implement them is going to be a global skill that everyone’s going to require. But it’s a great idea we’ve got about the international students we still have in Australia, about 100,000 international students that have graduated and they and many that want to stay in Australia they want to become residents and some of them have been struggling to get work experience to be able to work in offices because their English may not be perfect but the best

Could that be an avenue for them?

Absolutely an avenue for them because as a Digital Business Cadet, you know the Institute and Small Businesses Australia will find the host organisation and supervise you doing the projects and provide you with coaching to help you learn about going to work inside an Australian business and how they work while you’re working on your projects.

Great. Well, it’s always lovely to have you on and have your company here. Thank you so much for your time.

Great to see you, Holly.

Great to catch up. We’ll see you next week. Thanks, Bill.