For more than 40 weeks, border towns like Echuca and Moama experienced various restrictions, lockdowns, rules and border closures. And with JobKeeper about to finish up, many small businesses, particularly those in industries like tourism and travel agents, are facing closure through no fault of their own.

Bill Lang joined Jaynie Seal on Sky News to discuss the latest in small business news. To watch the video segment please click on the YouTube link below. 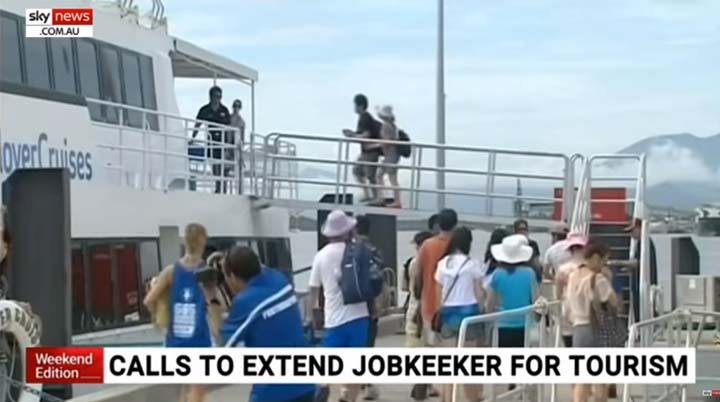 The following are transcript segments from the video clip.

Should JobKeeper payments be extended?

Jaynie Seal (Sky News)
Yesterday Josh Frydenberg spoke about the possibility of the JobKeeper extensions. What is your take on this? Do we need to extend or tweak JobKeeper payments?

Bill Lang (Small Business Australia)
I think there’s no question that we need to have some ongoing, very direct and very tailored and sensible support for particular industries of a particular size, and in particular locations.

But rather than calling it JobKeeper, this is about small business saving and saving some small businesses, and particularly in an area like the travel industry and travel agents is just one small sector, but there are 3,000 of them that are independent small businesses, employing more than 40,000 people.

The research we’ve just conducted says that potentially 2,600 will close on April 1, putting another 30,000 people into unemployment, unless there is some tailored, direct small business survival support provided and it’s not necessarily just the federal government, the state governments have got a big role to play here we need Team Australia getting together and understand and having the both understand what’s needed, and then together ensuring that the small businesses in those particular sectors get the support, you know, from a combination of both the state and the federal government so we get as many of them through to 2022.

Insights found in the survey conducted on the tourism industry

Jaynie Seal
These are extraordinary statistics that you’re talking about here with your 750 independent travellers, you’re saying that up to 30,000 people, and how many women? How many men? What else did you find in this survey?

And a couple of things that will be many people sort of don’t realise, and a lot more people are using online, but when Australians in the past have booked overseas trips, particularly sort of older Australians, and there’s visas involved, and accommodation and tour packages, and all of those things, two-thirds rely on travel agents that they’re sitting down with a meeting face to face, or dealing with over the telephone or printing out the tickets, and all those sorts of things, you know, putting the documentation inside the travel wallet. So we’re not talking about, you know, Millennials that just go online and buy a return ticket to go to Bali, and sleep in a tent or whatever up there. We’re talking about, you know, older Australians, significant investments. And if we take, if these businesses are still operating in April, there’s still about $4 billion of refunds that they’ve been working on collecting that yet to be collected, they spent all of last year doing cancellations and helping their clients get refunds back.

So there have been no new revenue going into the sector. And it’s just an example of where these broad-based things like JobKeeper played a very positive role. There’s no question about it for many of the people that actually received it. But now we’ve got to get much more targeted. And in some degree, it’s a bit like we’re in this sort of the last day of a test match. We’ve got, you know, states batting at one end, you know, the federal government batting and the other and they’re arguing with each other, pointing the fingers at each other, as opposed to focusing on what do we need to do to get the right score on the board to win the test.

Jaynie Seal
Talk about tourism rescue funds, explain what that is, and what needs to be done to support organisations.

Bill Lang
So tourism is a very broad terminology, and many people think of what we don’t have the international tourists coming in. That’s true. But we also, you know, haven’t been really able to travel interstate to the extent that we could then rules got changed overnight. So there’s still ongoing uncertainty, even amongst local Australians, you know, replacing what they might have done in terms of international trips, you know, into the local tourism economy. So that’s, that’s a major problem in its own right.

But these travel agents, in particular, one subset, so there was a fund established, there is a fund established, and its a bit over $100 million. But the back of the envelope is it needs to be more like a billion dollars. But in the design of the fund, different accounting approaches get used by corporate-owned travel agents, the big guys versus the smaller, independent ones. And it appears that the design of the fund is very unfair, with a majority of the independence being unable to receive anything, and if able to receive something, something very small, this is due to accounting technicalities. And that’s where, you know, we’ve been asking and hundreds and hundreds of agents have been asking their MPs to come and understand how my business operates, so that there’s a fair result, but the fund needs more money, but it needs to be fairly available and fairly distributed, as opposed to what’s been designed.

Now look, of course, you know, no one’s got anything perfect with respect to the pandemic. You know, a number of things have been sort of invented and put in place if we’ve gone along, but a lot has been learned, you know, JobKeeper has been in place for a period of time the federal government says it’s coming off very State governments are saying various things and doing various things. But we need some plain English, direct to the business, it can all be easily justified by these businesses to get as many of them through to 2022. Otherwise, if the government’s going to be picking winners, they need to start telling as well, which industries, are they picking up the losers? So those business owners can start making, you know, the adjustments you need to get ready to be on unemployment, welfare.

Jaynie Seal
We’ve had some recent big announcements about border reopening. And travel, certain restrictions being lifted, Bill, what are you hearing? I mean, obviously, we’re talking about Australia and just moving into other states and so forth. But in terms of domestic travel, are people nervous in terms of buying a ticket to go interstate? Or what about when they have to book into a hotel because you’ve got to look at the chance of refunds, and so forth. So what are people? What are you hearing there?

Bill Lang
Obviously, there’s no question when we talk to operators in the industry. And in fact, one of the hardest hits parts of Australia is not really covered by the national media, but it’s the area of Echuca and Moama on the New South Wales and Victorian border and in effect, the businesses there have been impacted by various restrictions and lockdowns and rules and border closures and the need for visas to get into Victoria are effectively for more than 40 weeks.

So you’ve got businesses there where, you know, JobKeeper’s not helping them and not going to help them anymore. There’s absolutely no revenue, they geared up with a whole bunch of bookings. And then overnight, when borders were closed over the Christmas period, those bookings were cancelled. So we have up in that particular it’s a little microcosm, but it’s probably the hardest hit area, hundreds of small businesses that all rely upon local tourist, day-trippers, weekenders, a lot of people go up onto the Murray River, and need to get back across the border. But the Moama/Echuca area is just one example of a microcosm of an area that’s been incredibly hidden.

You know, most consumers I know my own case, we were gearing up to head down to Tasmania, and some changes took place and it’s like, we’re going to take the risk. What if we get stuck down there. So there’s changes but we need now some confidence that the changes will stay in place and that it was not the odd couple of positive cases and yet some new strain, all of a sudden you’ve got to state premier or two closing everything down again.