Clear vision and action required by the local government

Previous
Clear vision and action required by the local government

Small Business Australia Executive Director Bill Lang said the situation is “an emergency” as several businesses fail to recover from the effects of the pandemic.

The Today Show – CBD ‘Emergency’, calls for workers to return to Melbourne[See transcript snippets below] 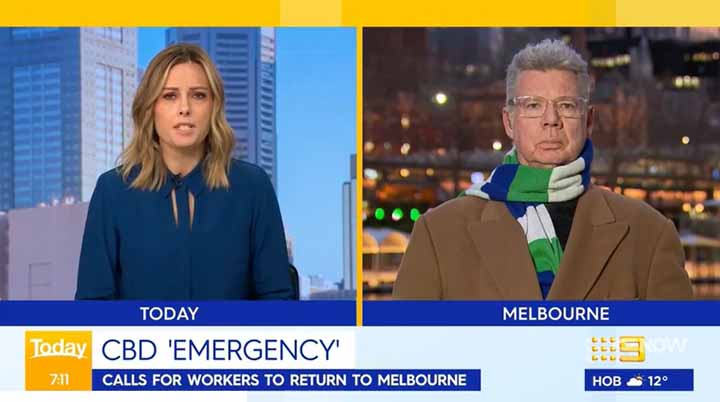 Bill Lang
Transcript snippets below from the live interview

“Yes, Ally like, you know, in the backdrop here, what people really are looking at is ground zero for the economic perspective of the impact of the pandemic. We all know that Melbourne was the hardest hit with lockdowns. We still have many 1000s of businesses here in the city of Melbourne that are in the depths of continuing growing debt and despair with respect to when will the workers come back?”

“There’s certainly been some messages to encourage people to come back. But our biggest employer is the state government of Victoria. Our understanding is it’s still quite optional. You know, Mondays are very much the worst day of the week. We call the City of Melbourne a CBD, a central business district so people need to be here they need to be doing business. The weekends are fantastic. The people of Victoria, interstate visitors are coming back on the weekends, you know, enjoying all the fabulous things that Melbourne has to offer. But we need to have people back in their offices collaborating, working together.”

“Look, a number of already closed Allison and others are on the verge of closing. The real thing they’re really saying is we want to see some positive leadership from the government. We don’t hope, hopes not a strategy. What is the clear vision? What’s the clear action plan? And it starts with getting workers back into those offices Monday to Friday.”

“It’s all about leadership at the end of the day, there are many benefits for everybody, including the workers, the teams that they work on, we have issues in Victoria with our level of state debt and the productivity of our civic servants. We need them working together becoming more productive, they will get more out of their jobs, I’ll make a greater contribution to the community, particularly to the businesses here in the CBD of Melbourne.”

“There’s an ongoing conversation going with respect to different parts of the government, but again, what we’re not seeing is, you know, clear vision, clear action. There’s a lot of talk, there’s a lot of talk in politics all around the country. And look, it’s not just the state government now that we have a new federal government let’s get the international students back we need another 30,000 or 40,000 that are missing that used to live in the city of Melbourne, used to be available as part time employees and used to be customers in the city of Melbourne. At the local government level here in the city of Melbourne we need to remove a bunch of the barriers that exist to making it easier for people to come in into the city. So look, it’s it’s a team effort that’s needed, less talk Alison, more action is needed.”