As the snap announcement was made on Friday for a third lockdown many small businesses had spent millions preparing for a busy weekend.

Bill Lang spoke with Jaynie Seal from Sky News calling for the Andrews government to restore confidence, share all of the information with Victorians, particularly those operating a small business “It’s time to step up and provide full compensation to these small businesses that are bearing the biggest costs associated with every time they spread fear and lock everything down.” 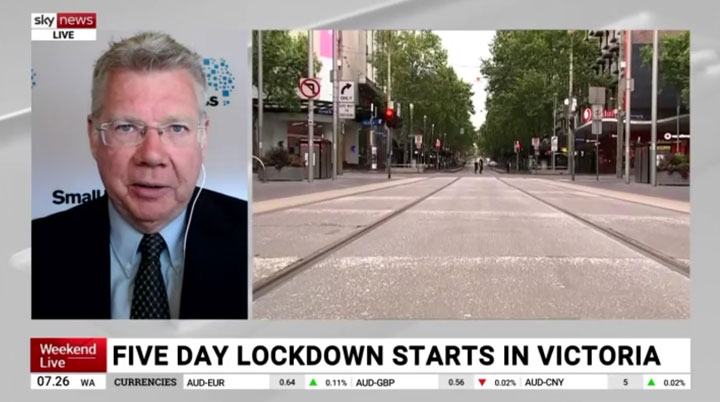 To watch the video segment please go to the YouTube channel below.
Or alternatively, you can read highlights from the transcript below.

Jaynie Seal (Sky News)
It is day one of strict stage four restrictions in Victoria. It was set to be a busy weekend for small businesses celebrating Chinese New Year and Valentine’s Day. So how is this decision going to affect their bottom line? Bill Lang, Executive Director of Small Business Australia joins me now. Good morning to you, Bill.

Jaynie Seal
20,000 tests conducted in the past 24 hours, one new positive Coronavirus case confirmed in the state of Victoria. Bill. If this UK strain is so infectious, why wait until midnight? Do you think the Andrews government should have done an immediate lockdown?

Bill Lang
It would appear so if we’re to believe what they’re actually saying about these things. And there are different views that different epidemiologist seem to be saying around incubation periods. And that yes, it may be more contagious, but it may still be taking the same amount of time to catch etc. But why do you let a few 1000 people still go to the tennis, not wearing any masks. Basically, most pubs and cafes and restaurants were as busy as ever up until sort of customers have to go home last night, and then started at 11:59 PM.

You know, there’s inconsistencies, there’s lots of question marks around whether we’re really being told the full truth. It got, you know, happen so quickly. Probably $30 million worth of fresh food had to be thrown out, you know, overnight, as a result of people gearing up as you’ve identified Chinese New Year, Valentine’s Day. Now, you know, the polls say that Victorians I’ve got a love affair with this particular premier. Hopefully everyone will sit down on Sunday and sort of realise that the small business owners, they’re bearing the greatest financial, mental health economic costs, emotional health costs, and no announcements about full compensation, no announcements about how we’re going to help you get through.

The last time around with this Jaynie, the initial answer was only going to take two weeks. Chief health officer here said it’s only going to be two weeks and then ended up being 12 weeks. And that’s why there’s still incredible nervousness here in Victoria. And I noticed that Coles even came out overnight and said, Look, they’ve just had their 11th run, 11th run on stock that they’ve got in their supermarkets over the last 12 months. So we’ve got big, big issues around the confidence in the leadership that we’re getting. And are we being told the truth? It’s very, very concerning.

Jaynie Seal
Really concerning with those figures that you mentioned as well, not to mention $100 million there abouts for the overall cost for these five days in lockdown for Victoria alone. You mentioned no rescue package basically given for businesses should there be one and you know that the trust is certainly, as you said, fading away with the Andrews government.

Bill Lang
I think Jaynie, look, why wasn’t there an announcement made straightaway saying that every business will receive you know, direct proportionate, you know, cash injection, to cover rent, and all those other things that costs that have been lost. You know, one of the restaurant tours, Chris Lucas down here, you know, he’s had 5,000 bookings across his group of restaurants here in Melbourne have had to be cancelled, millions of dollars worth of stock. Stock that was bought and that was fresh. Now that has to be thrown out.

So we never hear anything about this in terms of where’s the help for the small business owner? Where is it being directed? And they’ve been last time around, we hear all is spin in many respects you know, Daniel Andrews is the Donald Trump of big statements, and everything’s great and we’re doing world-class. And perhaps I’m the smartest person in the room, you know, ministers coming out and making statements on how our quarantine systems fantastic. You know, I think every Victorian is sitting down based on what’s happened in the last 24 hours and saying to themselves, well, is it really the case? You know, they had an inquiry, the inquiry found that no one made decisions about what had taken place.

The only reason they’ve gone to this full lockdown is because they do not have confidence in their so-called best in the world now tracing system. And I think we’re going to find that is an inquiry into this tracing system decision made, how it all operates, etc, is actually going to be a bigger and bigger deal in what’s taken place with respect to the way they’ve gone about managing these various hotels. But like, why not, why not let every small business owner know you’re going to be directly compensated. Last time around, they took about $100 million here, etc. And it turns out only about 10 million of it, people being able to access because they’ve come up with complicated rules that mean most people can’t actually access it. It’s time to step up and provide full compensation to these small businesses that are bearing the biggest costs associated with every time they spread fear and lock everything down.

Jaynie Seal
Bill, should we be comparing ourselves to overseas or should Victoria be comparing themselves to perhaps New South Wales who is considered one if not the leading places in COVID safety?

Bill Lang
I think everyone around the country sort of looks at the way New South Wales has done things we’ve had, you know, state premiers, you know, put the state’s first the old colonies first over the country and everyone’s frightened. Like again, 11 runs on Coles supermarkets over the last 12 months shortages. Like it’s absolutely ridiculous. And this is all around populism, the popularity of these premiers, wanting everyone to stay safe. We aren’t going to keep you safe. You listen to the language of the premier of Victoria, it’s always I, I, I, you, you, you, you must, you must, you must or I will, I will, I will. It’s time for him to do the right thing, restore confidence, share all of the information, be open with the truth. And if people will not trusting him, it’s time for him to move on.