At the beginning of lockdown, the government announced that $100 million was made available for the potentially 300,000 sole traders. Recent figures show that only $10 million of that has been able to access by businesses leaving many struggling to get by and having to dip into their own savings. 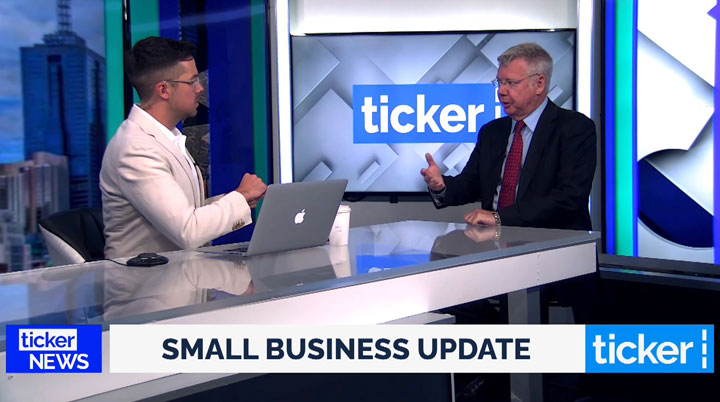 Adrian Franklin
Let’s talk about what’s going on WA in Perth in particular, you know, they locked down after the one case in terms of small business, what are you seeing here?

Bill Lang
Yeah, well, I suppose as a few very disappointing things, particularly for the small businesses of Western Australia that, you know, one positive case, it’s alarmist. You know, again, getting everyone very frightened, closing the whole place down. Unclear what the actual support is, for those businesses. It came out of the blue, do the people of Western Australia actually know it could happen that quickly. Then there’s what happens for people outside of Western Australia.

So overall confidence, are state government’s going to keep, you know, one positive case, straight to the shutdown, we had this happen in South Australia as another example. So this increases uncertainty. It also raises questions around just how well prepared are they? This is a security guard we are led to understand, well, they do understand that the person also had a job in terms of you know, driving ride-sharing cars, has been out in about 15  different locations, you would have thought that you know, other states could look at what other states are doing and learn some things because there’s a lot of lessons learned from what happened in Victoria. But it would appear we’re not seeing that WA.

Adrian Franklin
You’ve obviously spoken to a lot of small businesses and you do speak to them. What do they say to you when something like this happens? For example, we know in Victorian happened all last year, what’s their response? Is that the fear-based uncertainty, what do we even do at this point

Bill Lang
Yeah, well, again, it has an impact on how they’re feeling right? They’re the most stressed part of the population in Australia, the people that have worn the biggest emotional, mental health and financial costs are small business people.

There’s just a poll out, I think, today, and I saw that in terms of satisfaction with the financial situation it’s actually Liberal Party supporters, some of which are small business owners, they are the ones that looking forward are going to be worse off and much greater percentage than say, like traditional Labour Party voters. So this group of small business owners feel very let down by what has traditionally been the party of small business. They feel like they are the Forgotten People by the Liberal Party and the famous speech for Menzies was about the Forgotten People. But they’re sort of saying, Well, you know, where the bloody hell are you now?

Click here to view a copy of The Forgotten People speech on the web page of Tim Nicholls MP.

Subject: The latest support for small businesses in Victoria

Adrian Franklin
What’s the latest for support for small business in Victoria?

Bill Lang
Yeah, look, I think there’s a general growing level of confidence in Victoria, which is great news. And things like the vouchers to get people out and about in the regions is good, but the CBD still a ghost town. So there still needs to be more leadership, particularly from the government and getting public service workers back into the offices.

But the other very disappointing thing and we talked about it here at Ticker, you know, when the support for businesses was announced, you know, many weeks after lockdowns happened. So it was made up after the lockdown happened. Only $100 million was made available for the potentially 300,000 sole traders. It turns out, Adrian, only 10 million of that of business has been able to access so governments make big announcements, they talk billions, hundreds of millions and, and most citizens go Well, that sounds good, sounds like the government’s doing something. But when you’re actually there at the front line, and you see what’s going on, you realise, hey, this is talk, this is spin. It’s too complicated. It’s not simple enough. It’s not fast enough. It’s not direct enough.

So we still have got significant issues amongst many small businesses, in terms of Well, what’s it going to mean, you know, the federal government JobKeeper, but the state government, they talk big numbers, but you know, show us the money?

Subject: Over 400,000 businesses likely to close when JobKeeper ends

Adrian Franklin
Tell us just a finish about JobKeeper. We’re talking about the fact that it may be finishing soon. But what does that mean for businesses that are hopefully moving forward? And, you know, maintaining their presence? Is there a real concern around JobKeeper and businesses just ending their journey in some ways?

Bill Lang
Well, absolutely. So we did a significant amount of research at the end of November, we identified probably 400,000 businesses in total, very likely to close for good, if there is not some form of very targeted support happening, you know, from the end of March.

Now, there are particular industries, like travel agents that have been totally decimated, then there are geographic areas, say the Echuca/Moama area, for example, being impacted by border closures, restrictions in Melbourne, all of those sorts of things. So, you know, we hear the Prime Minister saying, look, there’s no ongoing JobKeeper, we hear the treasurer say, there may be some targeted support, start telling us what it is, who’s going to get it so people can have some greater confidence around keeping going, or if they’re going to have to close for good being able to do it in an orderly way.

And we say once again, to the treasurer, and the Prime Minister and the Attorney General, let’s make sure that no small business owner is made legally bankrupt, through no fault of their own.